Everything related to our flagship word processor.
Post Reply
12 posts • Page 1 of 1

Can you insert an em space, en space, etc., in Nisus Writer Pro? If so, is there a keyboard shortcut?

This is fairly basic stuff, I know, but I'm very new to NWP (having come over from MS Word and Apple Pages) and am still trying to work out a few of the basics. Can't find the answer to this one via Google or in the manual.
Smile, you fool! You're still alive, aren't you?
Top

That's fixed just about every character question I ever had! Thank you!

Smile, you fool! You're still alive, aren't you?
Top

I reopen this thread after a long time, because I'm in need of a quick way to insert em-spaces. I remember in the past this to be very easy: type Shift-Opt-Space, and you get an em-space in any Mac application.

Now, this seems to have gone. I tried with the various Italian keyboards, the US English, and the French one, without any success.

There is no em-space item in the Insert > Special Characters > Spaces menu. The only solution I could find was to copy & paste from InDesign.

Is there some quicker solution? Will Nisus release a new version with this feature before evening?

modifying any keyboard is easily done with SIL's Ukelele:

ptram wrote:There is no em-space item in the Insert > Special Characters > Spaces menu. The only solution I could find was to copy & paste from InDesign.

Is there some quicker solution?

Another possible solution: add it as a QuickFix entry. Something like expand "&em" to the desired space.
Top

keyboards are system related - so you change [them once and] for all applications using Ukele, see my URL before. This is the way my German Extended keyboard works: 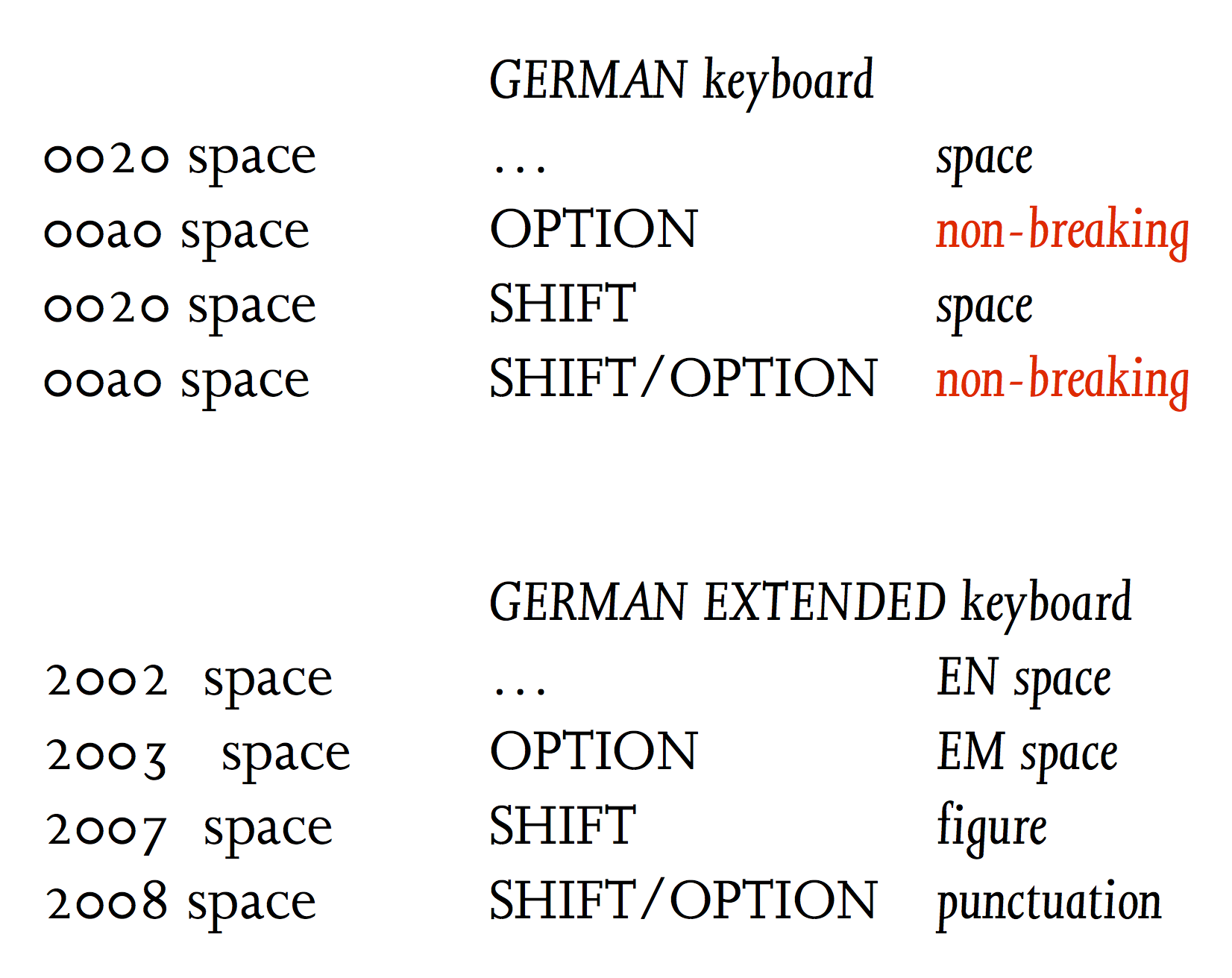 Idle curiosity: I'm familiar with most of the typesetting vocabulary, but this is the first time I've come across "em spaces" and "en spaces" as opposed to the more common em-dash and n-dash. What are the spaces used for?
Top

The em space is space that is 1 em wide. The em dash is a dash that is approximately 1 em wide (it can vary based on the whims of the font designer). The en is one-half of the em.

Today a common use of the em, or more specifically the em space, is to create paragraph indents in print and in place of pixels or points in CSS/HTML for web pages. The em (or multiple ems) may be used to create additional space around characters in a line of type when normal spacing is inadequate. When a full em is too much, the thin space is 1/5 to 1/6 of an em. The hair space is thinner than the thin space at approximately 1/10 to 1/16 of an em.

In addition to em space and em dash, the em-quad, also known as the mutton-quad, is another em-based measurement. The em-quad was used with metal type to create space between metal type characters on printing presses. It was a square metal spacer that was 1-em on each side. An em space may sometimes still be referred to as an em-quad although they are not necessarily the same width in today's digital type.
Also Known As: em space | mutton | em quad | mutton quad
Top

Great information and cite; thanks very much.

I wasn't aware of the use of the spaces in CSS/HTML coding. And I hadn't come across them in contemporary desktop publishing. Come to think of it, though, way, way back in the day, those thin spaces were used to help justify lines in Linotype machines. I guess they're still used in the few remaining letterpress operations.
Top

That's it. I'm ashamed I couldn't find this elegant solution myself. Thank you!


Elbrecht wrote:modifying any keyboard is easily done with SIL's Ukelele

I could add these characters to my own Italian keyboard (made with Ukelele). However, I'm not too happy with the idea of replacing the non-breaking space added with Opt-Space. Maybe I could only change Shift-Opt-Space for the em-space, that I use more that the en-space.