by Ruth
1. It happens from time to time that the special characters window from the Edit menu does not open.
Quitting Nisus and loading it again does not help.

2. Is it possible to add h, s and t (upper and lower case) with under dot to the special charaters list.
Getting the under dot with the extended US keyboard is VERY inconvenient. This will be versy
helpful to the users of Arabic and Hebrew.

by DavidK
I've always used an unline instead of an underdot, because it was just easier. It looks to me like the special characters menu is an apple feature, not a Nisus feature. Perhaps there is another way -- If an underdot could be easily added as a macro with a single key shortcut, I'd use it. How do you do an underdot, anyway?

customize your keyboard/s - I did mine using SIL Ukelele. You can customize keyboards as easily as adding/customizing shortcuts. There is no secret about it - just do it. I did customize U.S. Extended to include dot-under years ago - and contacted Apple to do as well. If you happen to enter dot-under characters with U.S. Extended now - remember it was me to suggest using OPTION-X and OPTION/SHIFT-X for this. I use my German Extended now because of the Umlaute! 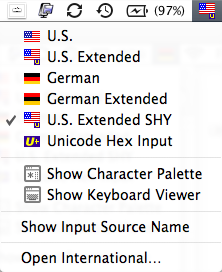 by Ruth
Dear Martin,
1. What about my first question?
2. I used this procedure but it is inconvenient! Especially when you have to repeat it
on different computers etc. I prefer to work with standard keyboards.
Using the special characters menu is more convenient.
Thanks. Ruth.,

Martin will answer concerning your first question - the "Edit/Special Characters" menu is an alternative way to "Show Character Palette" only. If selected/activated in "System Preferences/International/Input Menu" you can bypass Nisus under the Keyboard Flag Menu - as with all other applicatons as well.

But the real point is to enter easily dot-under characters directly with whatever keyboard you are used too - that's where SIL Ukelel comes in: modify your keyboard the way YOU want special characters to enter. Imagine entering "r-dot-under" with just typing "OPTION-R" and "R-dot-under" with "OPTION/SHIFT-R" - that's what you can get working with Ukelele. No special skills needed - comes with everything needed, inclusive Tutorial & Manual...

by DavidK
Elbrecht - I downloaded Ukelele some time ago on your recommendation, but have not had the time or the inclination to learn the workings of unicode and keyboard layouts in order to figure out how to create an underdotted letter. I just redownloaded ukelele and noticed the spiffy new manual and a bunch of example keyboards, but even after paging through the manual it wasn't obvious how to make option-X produce an underdotted h. If it's too difficult to explain in words, then I'll just keep using an underlined 'h.'

it all depends - what keyboards you are working with. I don't know, but if Hebrew or Arabic, then you can SWITCH with "U.S." or whatever. When you SWITCH with "U.S. Extended" you can enter "dot-under" in two ways:

With 1) you can enter pre-composed characters only, offered by the selected font;
with 2) you can combine specical characters not available pre-composed in the font -
1) still is the more elegant way - 2) often looks not really pleasing to the eyes...

3) Mostly for VERY special characters NOT contained in the "Unicode Standard" - you can [with "Ukelele"] asign for single characters to enter, out of the "Private Use Area" mostly - "TITUS Cyberbit Basic" is such a VERY special font for Linguistics.

So far without knowing about your way of working -
what keyboards and fonts are you using?

I'm using the Times New Roman font. With the extended keyboard, all I need to do it type Option-x followed by h, and I get a dotted ḥ. Just like you said. Thanks!

nice to get the dead keys back to life for you! You can learn more about the keyboards using "Show Keyboard Viewer" - [to be activated] - under the Keyboard Menu. Be sure to have "U.S. Extended" selected, then you can use the Modifier Keys OPTION and OPTION/SHIFT to see the keyboard layout changing. The YELLOW keys are the dead keys - live... 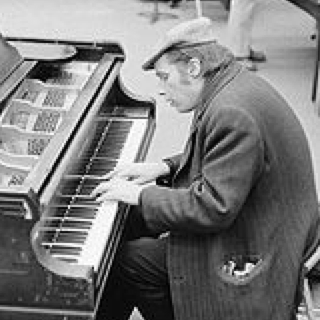 by Ruchama
Maybe I miss something in your discussion, but I think there may be an easier way (for regular users) to enter special characters. I mean through the macro option. I use it all the time for cumbersome-to-type characters of for a common combinations: just compose your macro for the underline dot (using its unicode number or some other id) , define a shortcut and you are done.. not? (That is, assuming the special character is avaiable in the character table..)
It looks to me that modifying the keyboard is very convenient if you are the only user of the computer, but may be a bit of a trouble if not. Also, the macro could be easily edited for several options.

but again, this is a matter of convenience and preference..

its up to you to use macros for entering special characters - but I think DavidK just got it! Did you ever tried too - I wonder? It is so much easier and much more direct to use the keyboard/s only for entering text. Essentially it is all about font/s and keyboard/s only - the rest is up to the text engine. Clever keyboards are the straight way to make use of huge fonts. Use more than one keyboard if you like or have to and SWITCH forth and back never leaving keyboards.

No need to change the keys as visually indexed on your keyboard - but you can customize the way OPTION & OPTION/SHIFT work for you. Take "Show Keyboard Viewer" and look what Apple did with "U.S. Extended" - the yellow keys are dead keys - a lot of them got variant ways to enter under OPTION/SHIFT: dead keys vs Unicode keys, i.e. typewriter vs handwriting. [Remember though: to enter dead keys "before", but Unicode keys "after" the character.] All else is free to users to customize as I did with OPTION-X & OPTION/SHIFT-X years ago - and now it is part of the official Apple keyboard design. To give you an idea, what my "German Extended" looks like backstage, here are shots to compare with "U.S. Extended" keyboard:

With SIL "Ukelele" everyone can customize keyboards the way s/he like to work - still the by far shortest shortcut to enter text. All else including Macros are workarounds only...

by martin
Thanks to Elbrecht and the others for solutions. However, as to Ruth's original questions:

Ruth wrote:1. It happens from time to time that the special characters window from the Edit menu does not open.
Quitting Nisus and loading it again does not help.

Can you make the window appear in TextEdit? It's a system/Apple window, so perhaps there's something wrong with it. I don't suppose it was just hidden offscreen accidentally?


2. Is it possible to add h, s and t (upper and lower case) with under dot to the special charaters list.

Yes, you can use the little "gear" icon in the bottom-left of the special character window. Choose the "Add to Favorites" menu when you have the desired character selected in the character table / listing.
All times are UTC-08:00
Page 1 of 2